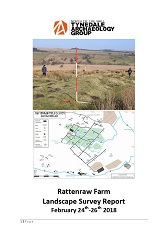 Between February 24th and February 26th 2018, nine members of our community archaeology group undertook a Level 1, 'walkover', landscape survey of parts of Rattenraw Farm. The survey was scheduled to run for a week with 16 volunteers due to participate, but the arrival of heavy snow brought by ‘the Beast from the East’ curtailed our original plans.


Redesdale has a particularly rich Roman heritage; when for almost four centuries it played an important role in patrolling the Roman frontier zone of the northern edge of the Empire. The Roman Road, Dere Street, leaves the line of the A68 at Blakehope close to where the track which leads to Rattenraw Farm now leaves it. It crossed the River Rede by a bridge about 400m due E of Rattenraw Farm before continuing through what is now the Otterburn Military Training Area, and was the main route from which the Roman army moved north under the command of Agricola. A large number of temporary Roman camps are known along its route including one at Blakehope, 1km SE of Rattenraw, and also more permanent Roman Forts such as that at High Rochester, 4km NW.


A pdf version of this report is available for downloaded here

This work is licensed under a Creative Commons Attribution-NonCommercial 4.0 International License