Back To Rock Art Home


Rock Art : Exploration of an enigma. The case of Ravensheugh Crags. 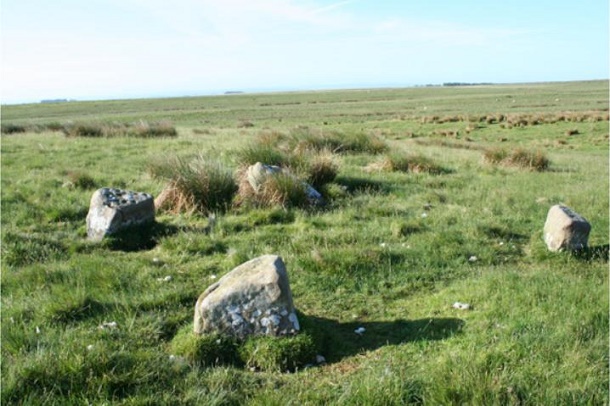 Once upon a time there were two known archaeological features near Ravensheugh Crags, west of Simonburn among the upland escarpments of the North Tyne valley. Beneath the crags there lie the remains of hut circles attributed to the Bronze Age, and up on the ridge there is a small stone circle. Both are designated scheduled ancient monuments.
The Goatstones Stone Circle is of the ‘Four Poster’ type, the vast majority of which are found much further north in Perthshire and Aberdeenshire. Immediately visible on the top of the north-eastern stone are dozen cup-marks. 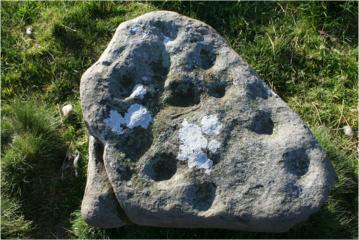 Closer examination by Stan Beckensall revealed small numbers of less obvious cup-marks on the surfaces of each of the four stones. Within a few hundred metres of the four poster circle Stan recorded half a dozen further stones bearing simple cup-marks. For many years that was it. Then in 2004, as part of Newcastle University’s Beckensall Rock Art Archives Project Stan revisited the site with fellow researcher Dr. Aron Mazel. Their discoveries on this occasion brought the number of recorded decorated stones, in addition to the Four Poster, to 16. In their 2012 survey of the area Phil and Anne Bowyer discovered a further 6 decorated earthfast stones and in 2013 further discoveries by volunteers during the joint Northumberland National Park/ Altogether Archaeology survey brought the total number of recorded stones at the site to more than 30. Although such new finds are always exciting for the discoverers mere quantity falls into a similar category to train-spotting or stamp-collecting.

The enigma of rock art, and particularly of the cups, rings and other associated abstract motifs, is bound up with the question ‘What does it mean?’ We shall never know for sure what was in the mind of the original creators of this rock art but archaeologists now realise that we can potentially learn something about the function or purpose of such abstract rock art by studying the contexts in which it is found. It is this that makes the discoveries at Ravensheugh Crags significant. It is already known that some rock art is found in association with Bronze Age or Neolithic burial monuments. Cup-marked portable stones have been found inside burial cairns at a number of locations. 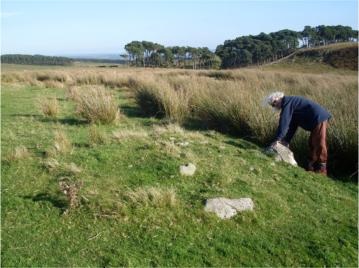 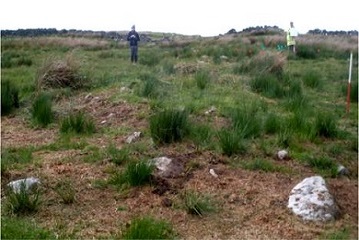 The vast majority of cup-marked stones are located in conjunction with the eastern-most of two cairnfield areas, each containing in the region of 20 small cairns. A number of the cairns in the eastern area are suggestive of burial monuments whilst the western cairnfield, where no cup-marked stones have been found, is more suggestive of clearance cairns. Without excavation these have to remain indicative rather than definitive assessments. 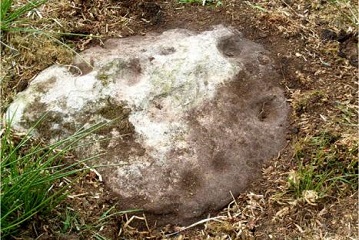 Whilst we await the analysis in the forthcoming full report of the NNPA/ AA survey it has been noticed that the position of a large proportion of the decorated earthfast stones could be viewed as delineating a boundary to the area of possible burial cairns. If this hypothesis were borne out by further investigations it would represent a nationally significant finding and add another dimension to our current understanding of rock art contexts.

The eastern-most of the cup-marked earthfast stones (Stone K) is highly decorated with simple cups and grooves. Perhaps of additional significance to the ‘cemetery boundary’ hypothesis is the identification of a burnt mound about 20 metres to the south-east beside a small stream. Burnt mounds elsewhere, when excavated, have revealed mounds of fire-affected stones surrounding a wooden trough. 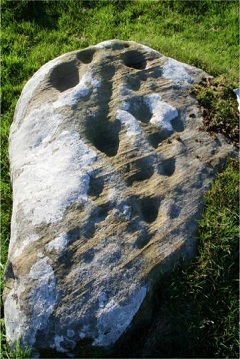 Bronze Age technology for heating water by heating stones in a fire and then adding them to the water. Also, steam can be produced by pouring water onto the hot stones, as happens in present-day saunas. The function of burnt mounds remains a subject of debate among archaeologists, but parallels have often been drawn with Native American sweat lodges used for ritual purification. This method of heating water may well have been used for a number of purposes but if, in this instance, the mound did have a ritual purpose related to access to and from a sacred burial area this would be a major finding. There is a second burnt mound beside the burn that runs along the south of the site. The site at Ravensheugh Crags contains a number of other interesting features including a circular enclosure that may be the remains of a round-house, probable stock enclosures, linear banks and possible round-house platforms. 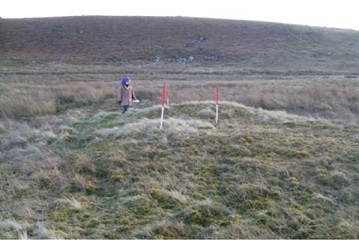 Whether any of these features are contemporary with the decorating of the stones is at present unknown. What is clear is that there is great potential value in further investigation of this site.

This work is licensed under a Creative Commons Attribution-NonCommercial 4.0 International License

Tynedale North of the Wall Archaeology Group, community archaeology in the north east.